Channel Partner Compensation: In Love with the 800 Pound Gorilla

Then we see it:  he starts buying her expensive jewelry, taking her out to expensive dinners, bowing to every request. It’s degrading. Eventually, it ends badly.  Bank account dwindling, he finally puts his foot down. She realizes the cash flow has stopped and moves on to somebody else.

It’s the classic Vlasic Pickle and Wal-Mart Epic, cataloged in the book Transforming Your Go-To-Market Strategy.

It’s the mid-nineties and Vlasic is the biggest pickle manufacturer in US with the highest brand awareness (and is able to command a healthy premium over other brands). Wal-Mart is a key partner, as it is to many other processed food companies, when it stumbles on a unknown Vlasic Product- the Gallon Pickle Jar.  Wal-Mart begins testing Gallon Pickle jar, and finds that at $3 they are flying off the shelves. Wal-Mart wants to run the promotion nationwide- the Vlasic Rep, responsible for selling pickles to Wal-Mart, quickly agrees.

Soon, Vlasic was selling 240,000 gallons of pickles at Wal-Mart every week. Sales growth was phenomenal, but margins were down.  Way down—Vlasic estimated it made less than a penny per jar, and the gallon jars sat in their customers’ homes, cannibalizing new, higher margin, business.  When Vlasic tried to renegotiate the price, they were threatened to be pulled from Wal-Mart entirely.  Vlasic’s management now couldn’t risk losing the partner that accounted for 30% of their sales.  Wal-Mart eventually moved on to other big name promotions.  Vlasic filed for bankruptcy in January 2001.

While Vlasic says that the Wal-Mart debacle wasn’t responsible for their filing, it’s still a classic case in channel mis-management.

Here are some questions I thought of during the story:

When designing a Sales Channel, it’s important to follow a sequence that makes sense. Make sure that you don’t design a channel management program with the wrong incentives – Download and view this Channel Management Design presentation Here.

While I agree that the gallon pickle jar most certainly caters to the Wal-Mart, cost conscious consumer, Vlasic misfired on its compensation program.  As a market leader in pickles, they could have chosen higher niche supermarkets, with better margins.  Instead, they went for the beautiful girl and left with an empty bank account.  If a Channel Partner holds too much power, learn when to walk away.

Channel partners and managers, what do you do when your biggest Vendor/Partner threatens margins that make the venture no longer profitable?

Go in with a plan on everything, including your direct sales force. Attend our webinar on June 14th to learn how to organize an Inside Sales Organizational Model. 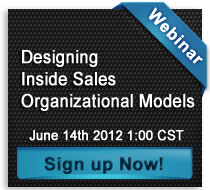 In a virtual world, Customer Experience has definitively been at the forefront of the digital revolu...

Leading a Legacy Company to Accelerate in Any Market Condition

Legacy companies have been able to withstand nearly every possible economic condition over several d...

How Will You Measure Your Sales Team’s Performance in 2021?

Sales leaders are all inundated with a significant amount of data. The ability to draw insights from...

How Software Leaders Pragmatically Prepare for 2021

The software industry has experienced more disruption in the last 6 months than in the previous 10 y...

How to Help Your Field Sellers Thrive in a Virtual World

While the world innovated rapidly and continually adopts many advanced technologies, the sales envir...

How Sales Leaders Avoid a Talent Exodus in Challenging Times

As a sales leader, you view the revenue planning process as a tug-of-war between reality and board e...

Nearing the end of 2020, less than a dozen market-leading CEOs gathered for SBI’s fall Advisor...

Death by information overload—a theme and phrase we often hear in the age of information techn...