To say the word fail out loud stirred Dave’s soul. He was a perennial ‘A’ player. Check out this resume:

Why did Dave fail?  This is a question we see the “manager of managers” ask themselves after they are fired.  Below are the 4 fatal flaws, the root cause and a “tell” to help you identify each. Notice that each can be traced back to Dave’s time as front line sales manager. These will alert you that the front line sales manager is not ready to become a second line sales executive.

#1 Teaching – Dave was unable to teach his team the fundamentals of great sales management.

Root Cause – As a sales manager he didn’t use any. Dave spent his time parachuting in to close deals vs. teaching his people how to close deals. He was a “field guy” and figured if he got his reps paid, they would like him and stay with him as he was promoted from within. What Dave didn’t realize was each time he closed business for his team; he was progressively stifling his own growth as a leader. With low turnover and high numbers, Dave was able to convince his upper management that he was “running the store” so they left him alone.

Tell – How is a professional sales management cadence followed? Is there discipline that shows a focus on incremental improvement with the team through 1 on 1s, skill building, in field “on purpose coaching” and tailored development plans? Is the sales manager truly focused on making reps that were better than they were or does the sales manager want to remain known as the best sales person?

#2 Selection – Dave could not identify potential ‘A’ players in the interview process.

Root Cause – As a sales manager, Dave didn’t spend any time hiring people. When he became a regional VP, many of his districts had high turnover and were actively recruiting new sales candidates. Dave was the final interview in the process. Because he had no experience selecting, onboarding and developing net new people, he was unaware what “good” looked like. He would hire based on personal bias and likeability vs. proximity to an “A” player scorecard based on competencies. New hire failure was over 70%. He was unable to coach his sales managers on why some candidates were successful and others were not. His region did not conduct exit interviews and distill learnings from each failure and then use those to ensure they were not repeated.

Tell – how are new hires performing? Are they ramping slower, faster or at the company average?

#3 Problem Solving – Dave was a tactician, not a strategist.

#4 Develop – Dave was not focused on growing people. He kept score financially.

Tell – has the sales manager promoted 1 person per year? Have they promoted somebody to sales management who is excelling?

Call To Action – Do you resemble Dave? Fortunately, Dave had the business maturity to realize he was not a sales executive. Dave’s skills are allowing him to thrive as a major account rep. If you are looking for an example, call my friend Scott Mee and ask him how he successfully transitioned to senior leadership. In addition, take a look at what best in class sales executives possess. Share your thoughts with us down below. 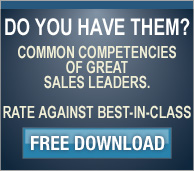 Leads the firm's focus on the CEO’s role in accelerating revenue growth by embracing emerging best practices to grow revenue faster than the industry and competitors.
BIO
ALL PEOPLE

Matt Sharrers is the CEO of SBI, a management consulting firm specialized in sales and marketing that is dedicated to helping you Make Your Number. Forbes recognizes SBI as one of The Best Management Consulting Firms in 2017.

Over the course of nearly a decade at SBI, Matt Sharrers was an instrumental early partner guiding SBI as the Senior Partner. Matt’s functional responsibilities included acting as the head of sales where he led SBI’s double-digit revenue growth, and was responsible for the hiring function to build SBI’s team of revenue generation experts.

Prior to joining SBI in 2009, Matt spent eleven years leading sales and marketing teams as a Vice President of Sales. Matt has “lived in the field.” As a result, he is the foremost expert in the art of separating fact from fiction as it relates to revenue growth best practices. CEOs and Private equity investors turn to Matt’s team at SBI when they need to unlock trapped growth inside of their companies.

A New Rep Profile: How Sales Leaders Are Evolving A-Players in 2021

Current State   The number of A-Players an org has can make or break a sales leader’s ab...

How CROs Gain Support from a Private Equity Backed Board

SBI recently held its Spring Growth Advisory Board meeting where less than a dozen market-leading Pr...

At SBI’s most recent Sales Advisory Board meeting, market leaders from a variety of industries...

At SBI we strive for all of us to reach our full potential by being diverse by nature,&nbs...